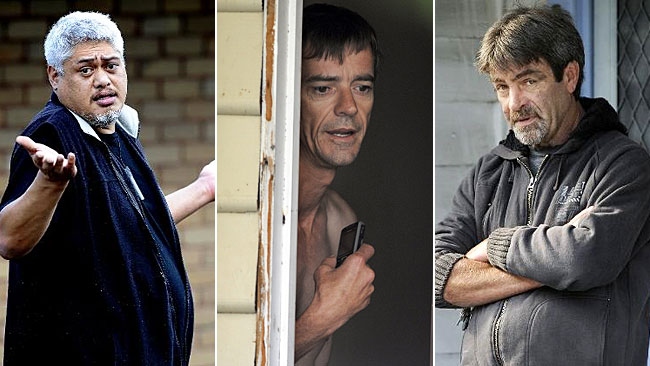 THREE “lucky” losers squabbling over their share of a $13 million Lotto win admit they have little to show for their good fortune.

Brett Pretty said he had bought a new car and a campervan, but most of the disputed money had been frozen by the court.

Mr Pretty claimed he had paid the others their share, but they “just got greedy” and came back for more.

Garry Garlick, who still lives in a modest rented house, said he bought a trailer, a TV and new clothes he will need to wear in court this month.

Mr Garlick also bought an HSV Clubsport sedan after the Lotto windfall, but it was badly damaged soon after and is now confined to his garage.

He said he dreamed of buying his own home and would “if I ever win Tatts again”.

Eugene Te Pairi, who is paying off the mortgage on a new house, said he had been Mr Pretty’s friend for 20 years and shared a house with him before the Lotto feud.

He said the three men could have saved themselves $1.5 million in legal fees if they had reached an agreement over the winnings.

Mr Te Pairi and Mr Garlick say the three pooled a total of $340 on the day of the Oz Lotto draw and had “an impromptu party” at Mr Pretty’s home in Carrum.

They spent $26 of the money on a 24-game quick pick ticket in the draw, which carried a record prize pool.

Mr Te Pairi and Mr Garlick say in statements of claim filed in the Supreme Court they had an implied “joint venture agreement” with Mr Pretty to share the rights to the ticket.

A Tattersall’s spokesman told Mr Garlick the next day the ticket registered in his name had won Division One and a prize of $13,185,273.

The Sunday Herald Sun reported a few days after the draw that an Oz Lotto instant millionaire “planned to share his $13 million winnings with his best mate — because it was his suggestion to buy the ticket”.

Mr Te Pairi and Mr Garlick, who have sued Mr Pretty separately, claim they were each entitled to $4,395,091 as a third share of the prizemoney.

Alternatively, they say there should have been a proportionate distribution of the prize according to the amount each of the three men contributed to the pool of money on the day.

Mr Te Pairi and Mr Garlick claim that late in the evening of July 23, the night after the draw, Mr Pretty asserted that Mr Garlick had no right to a share of the winning ticket.

The dispute between the three men over their respective entitlements developed over the next 24 hours until Mr Te Pairi and Mr Garlick say a compromise agreement was reached.

They say that in consideration of them forgoing their respective claims, Mr Pretty would receive the prize pool from Tattersall’s.

In return, they allege Mr Pretty was to pay Mr Te Pairi $3 million and hold another $3 million for him in trust in an interest-bearing account for at least 12 months, then pay it to him on demand.

Mr Pretty allegedly agreed to pay Mr Garlick $1.3 million and buy him a new car of his choice.

Mr Pretty allegedly also agreed to share $185,273 of the winnings for entertainment purposes, but would then retain the balance of the prize pool — about $5.5 million.

Mr Te Pairi and Mr Garlick claim that a week later the three men allegedly agreed to vary the compromise agreement so Mr Pretty would give Mr Garlick $2 million in total.

Mr Te Pairi claims his agreement with Mr Pretty was varied on November 24 so the total to be held in trust and paid on demand was reduced from $3 million to $2.5 million.

He claims Mr Pretty broke the compromise agreement by not keeping the $2.5 million in an interest-bearing account and refusing to pay him both the $2.5 million and his remaining half of the party fund.

Mr Garlick’s claim alleges Mr Pretty refused to pay him $700,000 of the $2 million he was promised.

Mr Pretty’s defence, filed in court, says he agreed to give Mr Te Pairi “a gift of $3 million” from the prize pool after asking him what he would need to set himself up for life.

Mr Pretty says he told Mr Garlick on the day after the draw he would give him “a gift of $1 million”.

Mr Pretty’s defence says in November 2008, the two men demanded he pay Mr Garlick another $700,000. Mr Pretty claims he signed a handwritten amendment to the statutory declaration agreeing to the increase, but did so “under protest and in a style other than his normal signature”.

The Supreme Court civil trial is listed for 10 days and is due to begin on April 19.