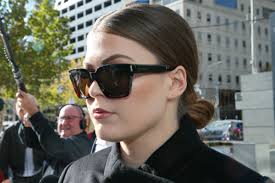 Fake wellness blogger Belle Gibson says she does not have the capacity to pay a $410,000 fine for conning consumers as she faced questioning in the Federal Court about her income, investments and assets — including cryptocurrency and Sportsbet accounts.

Gibson appeared in court with lawyers and documents in hand to respond to a summons pursued by Consumer Affairs Victoria (CAV) after she failed to appear at past hearings.

Gibson faced a possible arrest order if she had not turned up again on Tuesday.

The Federal Court had previously ordered Gibson to pay the fine by mid-October 2017 after she was found guilty of misleading and deceptive conduct for falsely claiming she had brain cancer that was cured by alternative therapies and nutrition.

PHOTO: Belle Gibson made hundreds of thousands of dollars from her recipe book and app. (Supplied)

Gibson made $420,000 after building a social media empire and releasing The Whole Pantry cookbook and app based on the claims.

It was later revealed she never had the disease.

She had also falsely told her followers she had donated a large portion of her profits to charities, earlier hearings were told.

During Tuesday’s hearing Gibson was asked if she had the capacity to pay the fine and she responded “no”.

Asked if she would pay the fine if she had the capacity, Gibson responded: “Absolutely”.

The court heard her rent, utilities and even her legal fees were often paid for by her housemate, Clive Rothwell, whom she described as a friend.

Earlier this year, she told the court she travelled to Kenya and Ethiopia, via Singapore, on holiday with her eight-year-old son.

Gibson told Federal Court Registrar Claire Gitsham she owed money for her son’s school fees and had an outstanding debt to her accountant.

The court heard Gibson has not worked since the Whole Pantry was shut down and now receives a government payment as her only source of income.

Gibson was also asked about her household and other expenses.

“On the rare occasion I sold some of my things in my home to make ends meet,” she told the court.

PHOTO: Belle Gibson’s lawyer said his client had done everything she’d been asked to do. (AAP: David Crosling)

Elle Nikou Madalin, the lawyer for Consumer Affairs Victoria, asked about her clothing, despite objections from her lawyer about the “absurd” line of questioning.

“She claims to be impecunious,” Ms Nikou Madalin responded.

“My client is entitled to find out where her money is coming from.”

Among other documents being sought by CAV were records for the online gambling firm Sportsbet and any funds held in cryptocurrencies.

Initially she said: “I failed to see how a cryptocurrency is an investment or an asset”.

But she later confirmed she had a cryptocurrency account with a balance of approximately $1,800 – $2,000.

Consumer Affairs is also seeking information about any income she might have received as an “influencer” on social media, where people are paid to promote or support products.

Gibson lodged documents on Tuesday, including two years’ worth of bank statements.

Ms Nikou Madalin sought an adjournment at one point to allow the documents to be thoroughly examined.

“She has not participated in proceedings until it was apparent that there might be some consequences,” Ms Nikou Madalin told the court.

“We didn’t know until we rocked up today that she was going to produce anything at all.”

Ms Nikou Madalin told Registrar Gitsham that the pile of documents “alludes” to Gibson’s financial position, but needed to be verified.

He argued his client had done everything she was asked to do.

He accused CAV of conducting the case in an “outrageous fashion, [which] has caused Ms Gibson unnecessary stress and unnecessary costs”.

Gibson was ordered to pay the fine in 2017 which included:

The matter will return to court on June 6.